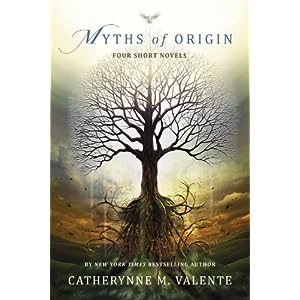 Myths of Origin, my VERY FIRST OMNIBUS EVER, is finally unleashed on the world!

It contains The Labyrinth, a surreal beatnik hero’s journey, Yume no Hon: The Book of Dreams, a chronicle of an old Japanese woman and her madness or enlightenment, and The Grass-Cutting Sword, a retelling of the Shinto creation myth, all of which were out of print, and quite pricey hardbacks to boot, along with Under In the Mere, my Arthurian book, which was written at the same time as those early novels, though published much later. That all would have cost you about $100 back in the day, and now are just about $10 anywhere you’d buy it.

It also has detailed notes on each book, where they came from and where they fit in with my life and aesthetic development. It’s a pretty awesome package–and check out that gorgeous cover!

Given that 2011 was a breakout year for me, it’s appropriate that Myths comes out this year, contexualizing the wildest and weirdest of my books. I look at this hefty tome and see how far I’ve come, and how far I still have to go, and remember the girl I was when I was just starting out and didn’t know any of the rules, so just barreled through writing like a 6 year old playing Streetfighter, mashing away the buttons to see what worked–and coming up with occasional fireballs.

You can pick up Myths of Origin at Amazon, BN, on Kindle or Nook, and even some brick and mortars. Anywhere you normally buy books. (On BN, if you’re fast, you can catch a glimpse of an old cover version!)

Later in the week I’ll see if I can dig up some old school icons from the ancient book releases. I’m using one now!

And now, as celebration of the New Baby, I will make an offer I never have before.

Ask me anything about these four books. Anything–even if it’s “what the fuck?” I’ll answer honestly and completely, with spoilers. You can ask me about the worldbuilding, or the answers to riddles, or why I made any of the choices I did. About what a sequel would have been to any of them, a prequel, a musical, a movie. Fire away, I’m all yours.