Unf**king My Relationship with Technology

Cross-posted from my tumblr, with gifs, because that’s how I roll over there, because I think it’s important enough to say twice.

I gotta be honest, my relationship with technology has gotten a little toxic lately. I stare at the Internet and I can’t make myself not do that, but the advance of microblogging and slow decline of the kind of thoughtful long-form blogging that brought me to the Internet Wurld in the first place. The robots in my house, they grab me and hold me to their cold metal breasts and I can’t get away.

Part of it is that it makes a really good procrastination tool. And that I am a tool. But most of the time I feel like my attention span and my ability to feel connected to the world physically and emotionally has taken a load of buckshot to the face.

This is a common existential problem, I believe. The all-net giveth and the all-net taketh. And knowing it’s dimpling your soul with spiritually radioactive debris doesn’t actually stop any of us from drinking from the cyber firehose.

Believe it or not, I have a fix for this.

I have had a lot of ideas in my life. Some stupid, some great, some workable, some very impractical indeed. What follows has to go down as one of my best.

Once a week, and we might even bump it up to twice, we have what we call an Abbey Night in our house. We turn off all but the most necessary power. We build a fire and light candles and hurricane lamps. And for the evening, we engage only in 19th century activities.

No music unless you make it yourself. No screens. All phones turned completely off. No writing unless it’s longhand. Tea means a kettle on the stove.

We still cook because we have a gas stove, but if it were electric I’d have dinner ready before the sun went down. We knit, we read to each other, we talk. We play with the dogs. We play cards and cuddle.

And a funny thing happens: when you turn all this stuff off, time dilates. There is SO MUCH TIME in an evening without the stuff that sucks it down: TV, Internet, phone calls and texting. There is attention to spare, and a sudden ebullience of discovering what we can do with all these hours.

Now, I now the 19th century was actually a shitty time to be an intellectual chick. Downton Abbey is a TV show about rich people, not a model for life. It’s the choice to turn it off that makes this powerful. We use the 19th century as an easy yardstick for what to turn on and off. We’re not super strict about it. It’s the idea of stepping back and indulging in what Kim Stanley Robinson once called paleolithic pleasures: other people, voices, fire, things you can do with your hands. 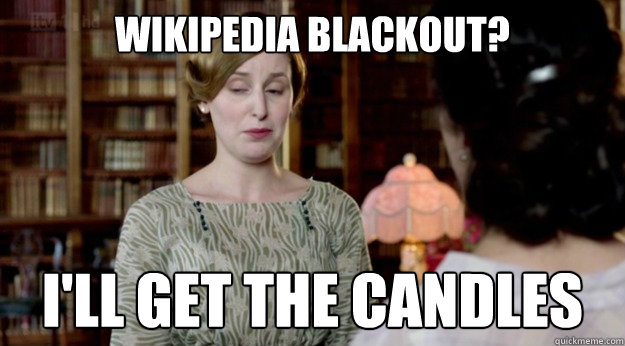 I’m not saying humans weren’t meant to have our shiny toys — we made them, they are ours, and very human, too. But there is something profound about going to ground this way, just once in awhile. It resets you, it brings deep calm. It’s like techno-meditation or the deep conditioning treatments you don’t use on your hair every day, but as a luxury every few weeks to keep things bright and strong.

When we’ve shared this with other people, they, like we, have been nervous at first, when the lights go off. They don’t know what to do. But in a few minutes it switches over to excitement and laughing and intense connection, delight, joy. Whispers in the dark.

Sunday was an Abbey Night. We roasted a chicken and read Lorca by candlelight and one of our guests played her cello while the other played guitar, we told stories aloud and sang, and we invited strangers we met on the island roads to our table where we fed them and gave them whiskey and read Stanislaw Lem to them until the ferry came to take them back to the real world.

And we all knew without the Rules, we’d have spent that night fixing websites or answering email and not talking much. It’s not that we’re bad people. It happens. It’s a technological world. But instead we had this precious evening by soft light that we’ll remember for a long time.

And that’s a point too: I remember each Abbey Night with strong clarity — most evenings melt into one long strain of work and vegging out and whatever. But these nights — I remember every moment.

So I’m posting this as a gift: I encourage you to try it, for it is magic. Of course, I’m sure YOU don’t have any TV at all and spend every day in a rapture of intentionality and mindfulness and you’re only even reading this on a computer you made out of coconut shells and superiority.

But for those of you who have issues with how you interact with time and tech like I do, this is an amazing thing. It is like a spell cast.

Interpret our rules however you like. I mean, the fridge stays on in our house and everything. But this is the single biggest tool I have for unfucking my tech-addled heart and reminding myself that I have a body, I have an interior life that needs more than the frayed ropes of energy and attention and connection and spoons that I’ve been working with. When I feel like a floating brain connected to nothing, which is more than I’d like, this brings me back.

It is good to be reminded that I have the ability to be grounded and full, that the world is not slipping away quite as fast as I think.